Thank You To EVERYONE Who Collaborated on The Columbus Arts Festival

We recently wrapped up  the 55th annual Columbus Arts Festival, and I couldn’t be more proud of the hundreds of people  and many businesses that contributed to the this year’s success. Throughout the Festival and for days afterward members of…

The Columbus Arts Festival is a Celebration of Community

Earlier this year my team and I went to the new riverfront for a walkabout. We went to explore the new site and talk about how we could best utilize this beautiful new park during the 55th Columbus Arts Festival…. 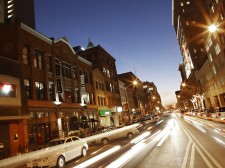 Columbus Could be a Model of Smart Transportation

Columbus is poised to be one of the great cities in our nation. One thing that could help get us there is the acquisition of a $40 million Smart City Grant, and thanks to city leaders Columbus is a finalist…

Why I Love Columbus: Columbus Understands the Art of Business

There is an art to great business. There is business behind great art. I love cities that can see both, and it’s one of the reasons I love Columbus as much as I do. Columbus is fortunate to be part…

Weekend Warriors: A Feast for the Eyes

By Lacey Luce Last week or so I was one unholy mess of a girl and as a result I missed a lot of great exhibition openings. So, I hope you’ll forgive me if this week’s blog is skewed to…

Weekend Warriors: A Student’s Guide to Exploring the Arts

By Grace Urano At this time of year, it can be exhausting to even consider leaving the comforts of home to explore the local art scene. It seems almost a given to grab some friends and Netflix for the night….

By Lacey Luce Happy New Year! Today I am full of the new-year spirit. I closed out December tired and in need of a serious nap, but now I’m up, full of energy and ready to embrace new experiences and…

By Lacey Luce As the year winds down I find myself feeling a lot of deadline pressure. All those things I said I would do in 2015, but haven’t quite gotten to because I thought I had oodles of time—well…

By Lacey Luce I hope you rested up during the Thanksgiving Holiday because there is a TON to do this weekend. Naturally this time of year we’ll start to see more holiday themed events emerge, but not to worry the…

We Have a Lot to Be Grateful For

As Thanksgiving approaches I do what many do, I pause and think about what I’m grateful for. Of course the first thing that comes to mind is my family and all that we have celebrated this year—including a beautiful new…