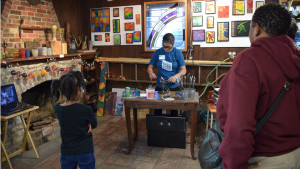 At the end of this month, more than 30 Columbus artists will open their studios to the public for an exciting weekend of tours and demonstrations. We’re all familiar with the final product of art — a painting, a book, a concert, a festival, a performance — but we don’t get to see behind the scenes often enough, and Columbus Open Studio & Stage (COSS) is a unique opportunity to do just that.

Three years ago, a group of local artists — Stephanie Rond, Catherine Bell Smith, Lisa McLymont and Amy Leibrand — wanted to let Columbus see behind the scenes of local art. So they created COSS, a weekend during which Columbus artists open their studios to the public, demonstrate their techniques and showcase their work in progress. The goal was to strengthen the relationship between the person who creates the art and the person who enjoys it. The first two COSS tours provided more than 50 artists, 12 community partners and eight stages an opportunity to give people a peek behind the scenes. Artists sold nearly $50,000 worth of work those first two years and performing arts patrons got to see what happens, literally, behind the curtain.

The third-annual COSS comes at the very end of this month, on Sept. 29 and 30. This year more than 30 artists will showcase their studios to the public. Six different performance venues will also offer backstage tours, including the Palace Theatre, which is welcoming guests before it officially re-opens to the public. Meanwhile, eight different community partners like Guitar House Workshop, the Cultural Arts Center and Wild Goose Creative will open their doors as well, and provide demonstrations and hands-on activities to guests.

If you’re as excited about COSS as I am, I encourage you to visit the special preview exhibition at the Main Library’s Carnegie Gallery. It features the artists participating in COSS, so you can get to know their work before you see where and how it’s made.

I hope you’ll join us for the tour Sept. 29-30! Get a preview of the participating artists and buy your maps at columbusopenstudioandstage.com.