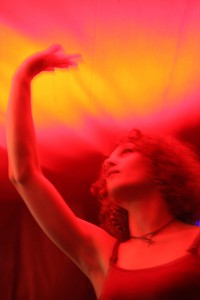 For this issue, we interviewed an outrageously talented local jazz musician, Nicole Rachelle.  Nicole’s passion for music began as a young child and was encouraged by her parents (both musicians themselves).  After discovering the saxophone in 6th grade, Nicole began seriously studying jazz, classical, rock and funk music.  As a high-school sophomore, she joined her school band director’s professional working band, Apex. While a sophomore studying jazz at Capital University in Columbus, Nicole joined Urban Jazz Coalition, helping them over the next decade to gain international acclaim.

Arts Council:  So, when exactly did you start playing the saxophone? Was this the first instrument that you were really attracted to?

Nicole Rachelle:  After a few false starts (violin, trumpet and ukulele) and some very useful piano lessons, I started saxophone in 6th grade. I had all the notes in the natural range of the instrument learned in two days, which was my first indication it was the right one for me. The Catholic elementary school I attended in Ashland, Ohio, had a cool principal who let me skip religion class and part of history to walk over to the junior high for jazz band in 8th grade. I’m still grateful for that opportunity.

In addition to saxophone, I did stick with piano long enough that I can play some backing keyboard parts, I picked up the flute in high school, and I picked up some hand percussion after graduating from Capital University. Don’t make fun of tambourine players until you’ve played one in perfect time for a whole song onstage.

My new quest is the drum set. I have a 1964 silver sparkle Rogers Holiday kit and a couple other ‘60s-‘70s vintage Ludwig and Rogers shells, too. It’s challenging to find enough practice time as an adult, but drums are coming as naturally to me as saxophone did. Once I practice for a few more years I’m going to be good. For now, at least I can keep a beat–but don’t expect anything fancy. 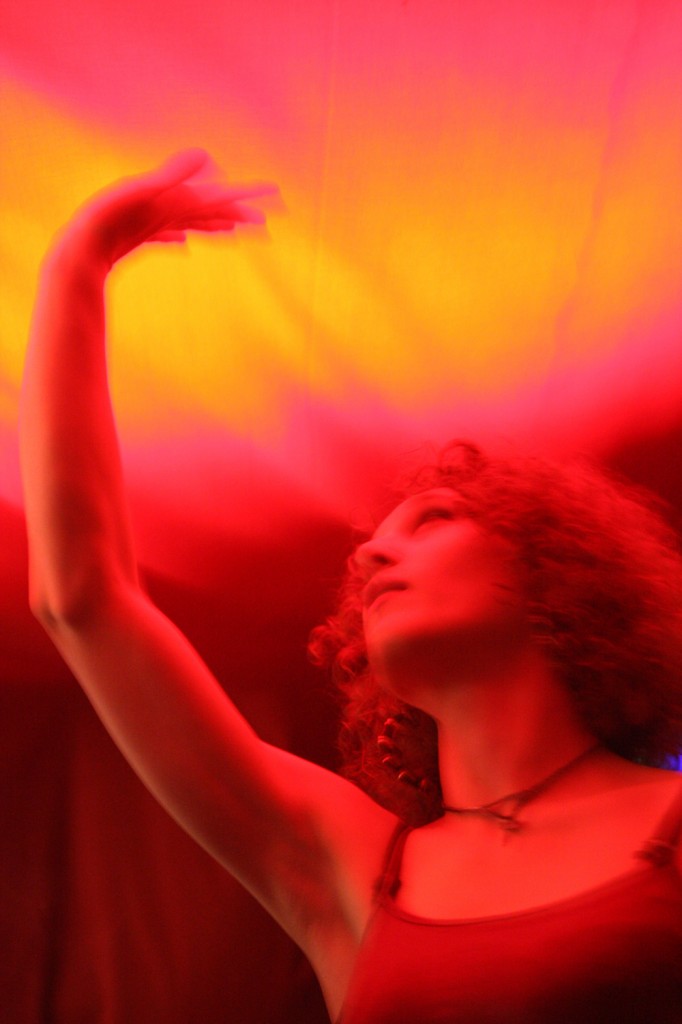 NR:  I was the big dork who obsessively listened to only four musicians for several years when I was in junior high and into high school. For saxophone, my guys were Cannonball Adderley and Charlie Parker. Otherwise, I listened to Pink Floyd and Herbie Hancock. That was it, seriously! I’m a little obsessive-compulsive. During high school I was into tenor saxophonists Grover Washington, Jr., Yusef Lateef, Bennie Maupin andStanley Turrentine. While I was at Capital University, I was obsessed withJohn Coltrane and Rahsaan Roland Kirk. Now I think Wayne Shorter is a bigger influence.

AC:  When did you realize that you wanted to make performing music a career?

NR:  Early in high school I decided I wanted to be the top jazz session player. I didn’t even know what that entailed at the time, but I knew I wanted to devote my life to music performance and composition. Music never gets old to me; even when I play the same songs night after night for years. I get a lot of satisfaction from sounding good with my band mates on stage.

AC:  What’s it like playing in a jazz group?

NR:  Being a great jazz musician is mostly about developing focused listening skills. Listen to Epistrophy by Thelonius Monk, but listen only to the bass player for the whole cut. Then listen again, but only to the hi-hat and cymbals. Keep listening until you’re able to listen to the saxophone and piano at the same time, but actually hear every note so clearly that you could sing it back.

When you’re on stage, you need to know what everyone is doing so you can respond. The soloist might take a left turn unexpectedly; that’s an opportunity for something magical to happen – when everyone on stage is focused on listening to each other. 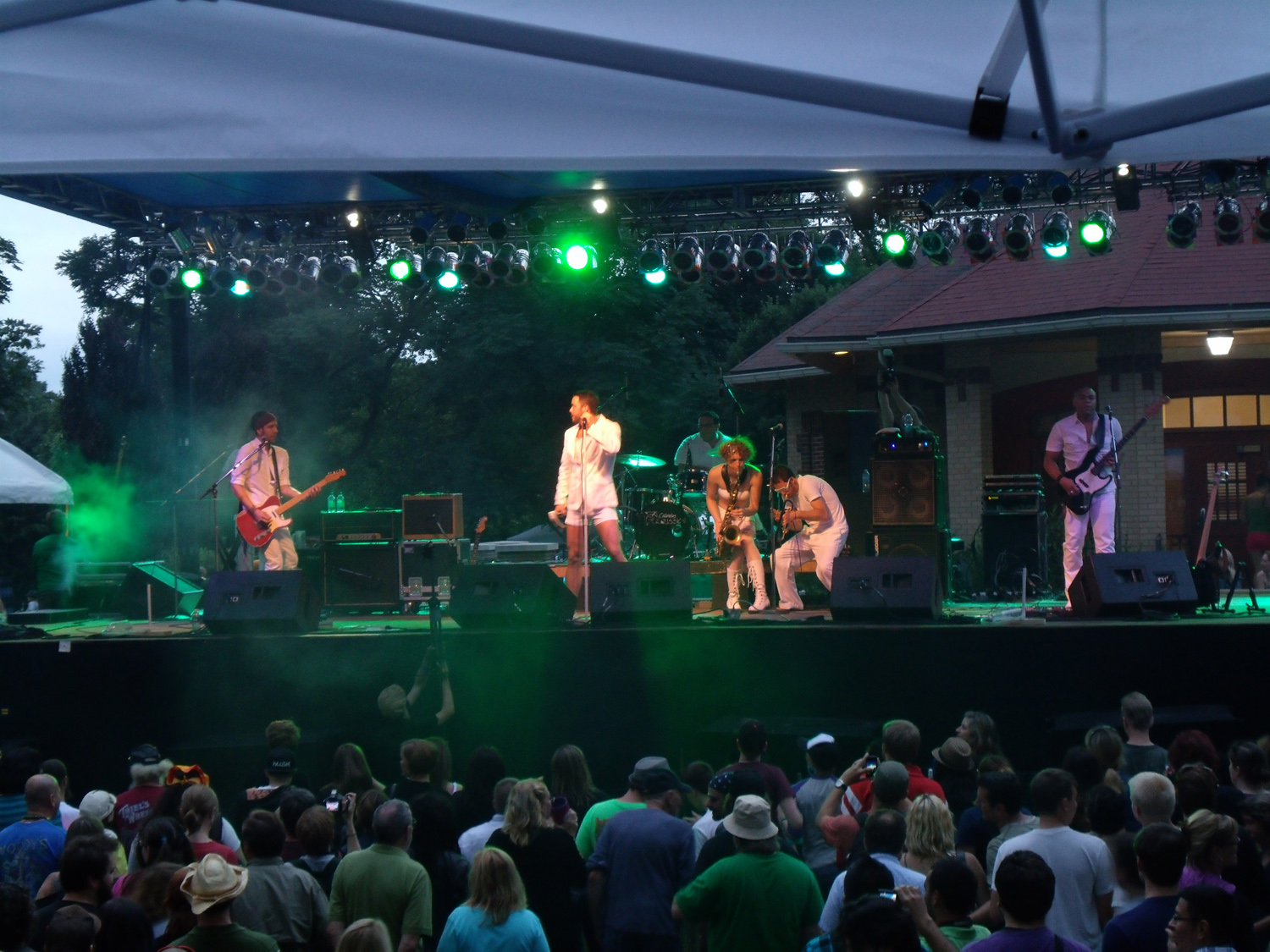 On the main stage at Comfest 2011. Photo by Hockensmith Photography.

Jazz uses a fixed-length repeated chorus, so there’s a set starting point and a set exit point for the solo. You can choose how many times around you want to go by clearly playing over that boundary, but you have to know where it is. You wind down your solo at end of that repeated form so the next section of the arrangement can start at the right time. It’s challenging for a beginning listener to hear that form clearly, because often the soloist will start a bit late in the form and bleed over a bit into the next soloist’s space. But the form is there underneath the chaos; and if you know the number of bars in the form, you can count them on your fingers and keep track of where the choruses begin and end. That can de-mystify the music a little bit so you get more out of it as a listener.

AC:  What have been your greatest successes so far as a performer? Your biggest challenges?

NR:  One of my biggest successes was at a jam session at Rumba Cafe a few years ago with Jim Maneri on keyboards and Jimmy Castoe on drums.
Jimmy decided to sing a song, a ballad I didn’t know. I took the solo, and played something that made the clouds part and the heavens open up. I have no idea where it came from, but it was one of those inspired moments when you feel like the music plays you rather than the other way around. Jimmy was crying when he started singing the last verse. There were maybe 20 people in the club; that magic moment was just for us. There was no recording of it, which is exactly how it was meant to be. Some art is too good to exist outside of its fleeting, unique, and precious moment.

It’s a different kind of high to play in front of large crowds. There were about 10 occasions where I played for several thousand people when I was in Urban Jazz Coalition. The Multicultural Festival in Charleston, WV, was a high point. The crowd was over 10,000 and they were really into the music.

It’s a different kind of high to play in front of large crowds. There were about 10 occasions where I played for several thousand people when I was in Urban Jazz Coalition. The Multicultural Festival in Charleston, WV, was a high point. The crowd was more than 10,000 and they were really into the music. The Fabulous Johnson Brothers have had some great shows as well. Columbus hosted the Gay Softball World Series in 2010 in the middle of the Short North, and it was packed! Comfest 2011 was a big show for the JBros, and so was Pride Festival 2012. This past Highball Halloweenwas overcapacity, filled with all kinds of freaky party people!

My biggest challenges have nothing to do with music. Years ago labels had A&R representatives who focused on artist development, who gave advice to musicians and helped them plan their careers. Now a musician has to be much more than a musician. In addition to being an entertainer, now a musician also has to be a fashion expert, booking agent, tour manager, contract writer, grant writer, video producer & call-center phone operator. Networking is the name of the game, which is honestly something I’m terrible at. I’m disorganized and chaotic. So this is a huge challenge for me.

AC:  With your talent, you probably could have gone anywhere to build a career. What is it about the Columbus that keeps you here?

NR:  The musicians in Columbus are terrific, and we really care about our city. It’s easy to feel good living in a city where people really try to keep things nice. Columbus is also a great place for a home base. It’s easy to travel just about anywhere from Columbus. L.A. is definitely too far to drive, but I can drive anywhere on the East Coast from here easily. I’m back and forth to Nashville right now. I’ve driven down to SXSW a couple times. Once I even drove into the middle of NYC. That was a mistake. Leave the car in Jersey!! Seriously, they have trains out there and parking is terrible. But Columbus is really centrally located, so it’s easy to get where you need to hit, then come back home where it’s comfortable.

AC:  What’s next for you? When and where can we see you play in the coming months? Do you have a website or FB page that people can join to stay tuned?

NR:  This year in Columbus I will continue to perform with The Fabulous Johnson Brothers, Shadowbox Live, Olde Cellar Band and Keeping Hope Alive. I also hope to jam again with Playhouse and Renee Dion.  I miss those guys!

My April performance in Columbus is with The Fabulous Johnson Brothers. We will be at my favorite club, Park Street Tavern, on Saturday, April 5, from 10 p.m.-2 a.m. You might want to get there early or you may get turned away at the door. It’s a madhouse during gallery hop!

I’ll be playing drums and tenor sax on the streets of Nashville and Columbus this summer.

To learn more about Nicole Rachelle, checkout her profile in the ColumbusArts.com Artist Directory.  Sign up for your free profile today!