Weekend Warriors: Leaping into Spring With BalletMet and More

It’s Wednesday, otherwise known as the day I start plotting my weekend—‘cause, let’s be honest, the weekend really starts on Thursday (aka baby Friday).

First let’s get the obvious out of the way. As I write this, the weather Gods are smiling down on us and it is looking to be pretty darn spectacular out this weekend. Of course, if you are reading this on Friday and the forecast has suddenly shifted to something less than stellar—don’t blame me, it’s Ohio.

But assuming that the weather holds, then you’ll be happy to realize that it’s Gallery Hop weekend—that’s right boys and girls, it’s May. Already. What?!

If, like me, spring = allergies, then the fabulous weather is not quite so fabulous, is it? That’s OK, there’s indoor fun to be had as well.

BalletMet, which if you didn’t know is truly a national contender when it comes to ballet companies, is launching yet another world premier with “American Masters.” Actually it’s three world premiers.

The show comprises four pieces where four masters of dance pair their choreography with four masters of music. Three of the pieces are premiering and the fourth is “Fancy Free” the classic ballet by Tony-award winning choreographer Jerome Robbins set to the music of Leonard Bernstein. The three world premiers include pieces by choreographers James Kudelka, Edwaard Liang and David Nixon paired with music by composers Caroline Shaw, Aaron Copland and Michael Torke (respectively).

I should also note that tickets for this amazing debut performance at the Ohio Theater start at only $25, and there are performances May 1-3.

The Jazz Arts Group is also bringing out the big guns for their season finale. Grammy Award-winning conductor/arranger/composer Maria Schneider joins them for “Big Band Evolution” on May 1-2 at the Southern Theater.

I normally like to focus on one weekend at a time, but I am thinking ahead this week. First Mother’s Day is looming and I haven’t found a gift yet, which is why I’m grateful that the Glass Axis spring sale is this weekend. Also, if you have wee ones, they have some fun, creative activities scheduled.

Mother’s Day however isn’t at the forefront of my thoughts (sorry mum). 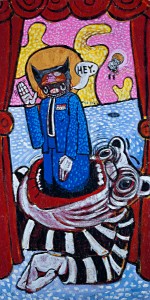 “We Eat Your Children (Hey!) by Dan Gerdeman, 2012, photo by Kaitlin Herman

That brain space is reserved for the Inaugural Art for Franklinton Urban Scrawl Mural Auction. Squeeeee!

I want a mural in my house and how I have an opportunity to bid on one and maybe even take it home. Ok, so it’s great that this is also a fundraiser for the Franklinton Arts District’s new George Bellows Grant Program, but mostly I’m just geeked up about the art. You can see previews and get deets on their Facebook page, and I’ll write more about this next week (that’s how excited I am!).

It just occurred to me that I left out Thursday. Maybe you should take a nap Thursday to ensure you have the energy to get through the weekend.

Columbus Children’s Theater is yet another fine Cbus organization ending their season with a spectacular performance in one of our beautifully renovated theaters. Their production of Disney’s Beauty and the Beast (my all time favorite fairy tale BTW) opens at the Lincoln Theater this Thursday, April 30.

I just love our city.

Lacey Luce is the marketing, communications and events strategist for the Greater Columbus Arts Council.