Weekend Warriors: Out With the Old, In With the New 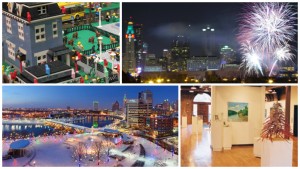 2015 has been a busy year for Columbus in all regards: food, sports, arts, urban development, you name it. Sometimes I find myself complaining that there’s nothing to do over New Year’s, but with the right resources I’m finding there’s a tremendous mix of things to do and see. Here’s a few I found!

First, try some gallery exploring. Some exhibits will wrap up in early January, so you’re on your last chances to catch it, like Whiteness of the Whale at the Cultural Arts Center, Keeping Pace at the Columbus Museum of Art, or Cloud City Collective’s tribute to Star Wars (which was awesome, amirite?!) at The Vanderelli Room.

There are some smaller galleries wrapping up exhibits this weekend, too, like cartoonist Katie Cook’s work at Rivet, or Larry Doyle’s gallery inside the Gateway Film Center (see Star Wars while you’re there!), or Kirsten Bowen’s solo art exhibit at Grid Furnishings’ new spot in Worthington. (Pro-tip: if you’re in Old Worthington, stop into Igloo Letterpress next door, get a cappuccino at Highline Coffee, then stop for lunch at Sassafras Bakery or The Whitney House.)

If you’re like me and you’ve got kiddos you want to keep entertained, you can find the Huntington Holiday Train, which is on display through the end of the year at the Huntington Bank at 17 S. High St. The mountainous train diorama is temporarily in the bank building while the Main Library is renovated. On January 2nd Franklin Park Conservatory has a Winter Crafts activity that’s free with admission – another chance to get out of the house and get playing.

Like their father before them, my boys are big fans of all things Lego, and lucky for us, COSI is hosting the Lego Travel Adventure while the Columbus Museum of Art is running Think Outside the Brick. Our seven-year-old will actually have an original Lego creation on display at the Ohio History Center starting in January. I love that they involve local Lego enthusiasts in these displays.

And then there’s the question of New Year’s Eve. I always feel such pressure to be in the right place at the right time, but then every year I realize that I can celebrate pretty much anywhere, and it’s who I’m with that’s more important. You’ve got plenty of options, from the big family-friendly First Night Columbus at COSI, to more adult-themed shindigs at Shadowbox Live, Lineage Brewing, Camelot Cellars, Short North Stage, or Natalie’s.

I’m also a sucker for Christmas lights, and I like that they stick around a bit after New Year’s. If the weather keeps up the warm theme, you can take a walk on the new riverfront to see the lights around the Scioto Mile, then head a couple blocks over for the Columbus Common’s lights.

As you ring out 2015 and welcome 2016, make art part of your experience. Show us what you’re exploring by tagging photos with #artmakescbus.

Nick is the Event Finder fellow for GCAC. When he’s not bugging arts organizations to list their events, he’s exploring the city with his family and writing about it on his blog at breakfastwithnick.com. By the time this post it up, he’ll probably have seen The Force Awakens a fifth time.