When Hockey and Printmaking Collide

Columbus, Ohio – In celebration of Columbus’ creative talent and the national hockey spotlight that will shine on Columbus in January 2015, the Greater Columbus Arts Council and Phoenix Rising Printmaking Cooperative teamed up to bring you Columbus on Ice 2015. Columbus on Ice 2015 is a series of limited edition, hand-printed, numbered and signed prints produced by three artists at Phoenix Rising Printmaking Cooperative—Filthy by Eliana Calle-Saari, Face Off  by Judith Steele and Breaking Out by Joan Tallan. There will be 250 of each of the designs produced. Prints are 8 x 10” on 11 x 14” archival paper and retail price is $20 a print or a set of three for $50.  The prints will be available on December 21 at the following retail outlets:

About the Artists: Joan Tallan works in both relief and intaglio printmaking and has been a member of the Phoenix Rising Printmaking Cooperative since 1999.

“The athletic grace of the sport of hockey was the inspiration for my print, ‘Breaking Out’. The challenge was in portraying the skill of the players as they join together to accomplish their goal. In the background we see the cheering fans and Columbus.” 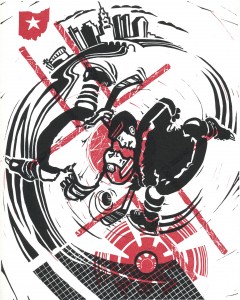 Judith Steele is a freelance designer and project manager with over 25 years of experience in the creative design of retail space and graphic design. As a fine artist, Judith primarily works in relief printmaking.

“I like the sound of the skates cutting into the ice, the chill in the air and the fast paced action at a hockey game. In my relief print, ‘Face Off’, I capture the intensity between the competitors and the constant movement of the players on the ice. The puck zooms between skaters and across the frozen field so quickly that in the blink of an eye the puck can land in the net. Immediately the beacon and siren announce the reward of a goal!”

Eliana Calle-Saari, originally from Colombia, uses printmaking as a nexus for the exploration of memory and its influence on the present. Eliana is currently a faculty member at Capital University.

“When I started this project I spoke to a few hockey lovers, looking for inspiration. The one comment that resonated the most was ‘Hockey players with excellent skill are referred to as ‘filthy’ by other skaters.’ So I decided to make an image of what I believe a ‘filthy’ player must feel like: alone and focused even if they are surrounded by hundreds of fans and fellow players.”

Proceeds from the sale of these prints will benefit the programs of the Greater Columbus Arts Council.  Media support provided by CD102.5. 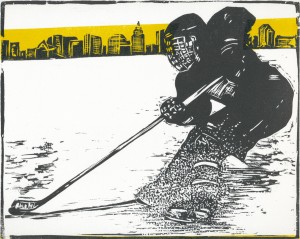 About the Greater Columbus Arts Council Through vision and leadership, advocacy and collaboration, the Greater Columbus Arts Council supports art and advances the culture of the region. A catalyst for excellence and innovation, we fund exemplary artists and arts organizations and provide programs, events and services of public value that educate and engage all audiences in our community. GCAC thanks the City of Columbus and the Ohio Arts Council for their continued support of all our programs. www.gcac.org About Phoenix Rising Printmaking Cooperative Formed in 1996, Phoenix Rising Printmaking Cooperative is dedicated to promoting the art of printmaking by providing a well-equipped studio, educational opportunities an d an environment of mutual support, camaraderie and inspiration for artists and students, and the community.  Classes and workshops offered to the public.  www.phoenixrisingprintmaking.com