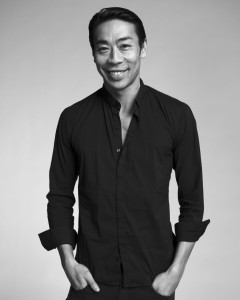 COLUMBUS, Ohio — Dancer, choreographer and BalletMet Artistic Director Edwaard Liang has been selected as the 13th recipient of the Raymond J. Hanley Award. The annual award from the Raymond J. Hanley Fund at The Columbus Foundation is given to an artist who has demonstrated a high level of achievement while working at least five years in the arts in any discipline. The award money of $15,000 is given without restriction, so that the artist can use it to further his or her career as needed. The winner is selected by an anonymous panel of judges.

Born in Taipei, Taiwan and raised in Marin County, California, Liang began his dance training at age five with the Marin Ballet. After studying at the School of American Ballet, he joined New York City Ballet in 1993. That same year, he was a medal winner at the Prix de Lausanne International Ballet Competition and won the Mae L. Wien Award. By 1998, he was promoted to soloist. In 2001, Mr. Liang joined the Tony Award-winning Broadway cast of Fosse; his performance was later televised nationally in PBS’ Great Performance series.

By 2002, Liang was invited by Jiri Kylian to become a member of the acclaimed Nederlands Dans Theater 1. While dancing with NDT 1, Mr. Liang discovered his passion and love for choreography. Since establishing himself as a choreographer, his works have been performed by dance companies around the world and he has won numerous awards for his choreography including the 2006 National Choreographic Competition.

In 2013, Liang was named Artistic Director at BalletMet where he continues to choreograph new works for companies both domestically and abroad. In 2017, he received an Emmy Award for his short dance film, “Vaulted.” In 2018, he created a new ballet with Roberto Bolle for the opening of the World Economic Forum Annual Meeting in Davos, Switzerland.

The Raymond J. Hanley Fund at The Columbus Foundation was created by past chairs of the Greater Columbus Arts Council board upon Hanley’s death in 2006. It is administered by the Arts Council, and continues the spirit of advocacy and partnership that the Arts Council has encouraged since its inception.

Mission of the Greater Columbus Arts Council: To support and advance the arts and cultural fabric of Columbus. www.gcac.org

For translations of this release and other pages, please see the dropdown menu at the top right corner of gcac.org.